I first went to Yone Beads in 1970. It was one of the very first retail stores completely dedicated to beads (sometime between ca. 1960 and 1963). Everyone knew Yone, because he was quite a gregarious and flamboyant character. Hermon was his business partner, but always seemed to be in the background.

In fact, I didn't really become friends with Hermon until Yone passed away. But I always considered him to be a friend who was there.

Yone Inc. closed about four years ago, after an unexpected disaster in the building, caused by a burst waterheater. Although efforts were made to restore the shop to remain in business, circumstances prevented that—and they were essentially forced to close. Hermon continued to live in the apartment he had shared with Yone for forty-something years, above the store front, and was still there until the day he passed.

I could not begin to recount the memories I have of interacting with Yone and Hermon. There are too many. Hermon's death is truly the end of a very interesting era—that spanned the Beatniks through the Flower Children (of which I was one), through the Punk and Goth years, into the present.

Anyone who wants to read an interview with Hermon from 2008, that recounts a lot of the history of San Francisco, and North Beach in particular, can find the text here: https://archive.org/stream/hermonbaker00bake/hermonbaker00bake_djvu.txt

Hermon was in his mid-to-late-90s—and I think can fairly be said to have had a full and interesting life. But he will be missed by those of us who loved him. RIP Hermon.

I thank my best girl friend, Lisa Jones—who was Hermon's best friend, for our long talk yesterday, when she told me about his death over the weekend—and for the photos she passed along to me shown here. 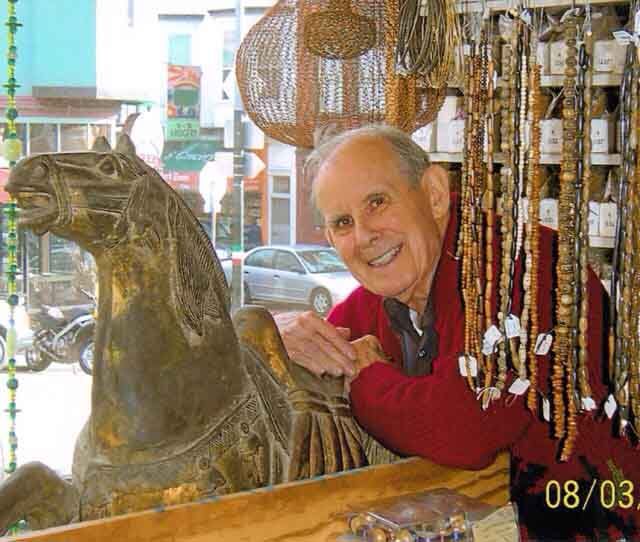