Sorry to be a little slow replying. It's a busy time for me.

I wouldn't want to pass judgement on an interesting bead's authenticity simply on the basis of a photo. It's done too often, and too much depends on it. But I will say that I find these collectors' books, as a category, unreliable in their attributions, not just in Thailand but in many other countries too. At their worst, they're vanity publications, and at their best, they're nice picture books.

In saying this, I'm not in any way putting down collectors or the culture of collecting. On the contrary, I'm certain that collectors and collectors' groups such as this one have done more, much more, over the past thirty years to further the study of beads than any other segment of society. More than museums, and much more than archaeologists.

In fact, archaeologists have neglected beads terribly for the most part. That's a pity, because beads, as the most frequently and easily traded of artefacts, can tell us more than just about any other set of objects about the contacts between different ancient cultures. But fortunately, archaeology is changing and younger archaeologists appear to be paying much closer attention to these tiny objects that frequently used to be left at the back of the storage shelf.

Two books you might start with are: first of all, Asia's Maritime Bead Trade by Peter Francis (to me one of the most amazing pieces of individual scholarship and research completed under quite adverse conditions). And secondly, if you want to know more about the pre-history of (some of) the area, I'd probably recommend Early Cultures of Mainland Southeast Asia by Charles Higham. I'm doubtful about suggesting it because it's outdated, not just in its information which has been partially updated, but in its viewpoint, which is old-fashioned in its views of the crucial trading patterns in the region. The discourse has changed substantially in recent years, but the book still contains a lot of useful information.

After that, you could start investigating publications by the archaeologists I mentioned in the previous post. If you work at it, many of them are freely availably online, and they will give you an exciting sense of how much is going on in the field.

That's it for now, I'm afraid.

PS: Here is another interesting "bead". It's a typical decorated blackened agate from the Samon Valley culture in Burma. Nice but not important, right? But it's very rare because it hasn't been perforated; it's very unusual to find one like this which has been finished on the outside without having been drilled; it didn't make sense! Things like this (thank you to Jan) excite me most. 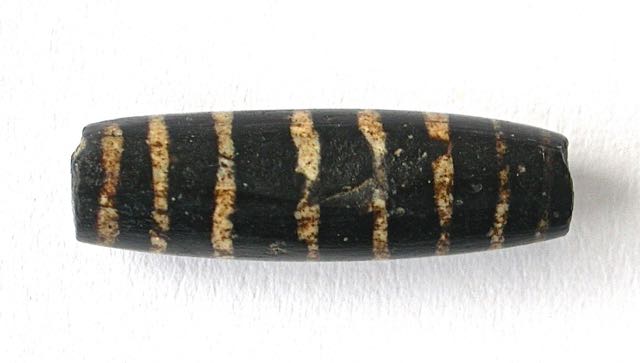