I agree completely with Fred. It’s natural to disagree about ancient beads and these disagreements help us to figure out the reasoning that underlies our own spontaneous judgements. So when I saw Fred’s notes on Kika’s photograph, I thought, “I need to think about this some more.” I didn’t have time till this afternoon when I sat down again with Kwan’s book on Ancient Chinese Glass and went through the pictures of more than a hundred eye beads in some detail. Here, for now, are my conclusions. I’ll take each of Fred’s points and note my responses.

1 “Overall surface texture much too even.” In fact, among Kwan’s glass beads a matte even surface is the norm. Of all the glass eye beads 31 out of 42 have a surface that is flat and even rather than shiny. I didn’t count the few that were damaged. This surprised me because I think of these beads essentially as being bright, as they obviously once were, but actually one of the consistent signs of age is the kind of surface that Fred complains about. Most of the pottery-cored eye beads are similar, and so are almost all the non-bead eye artefacts (plaques, inlays, etc).

2. “Thin application of decoration.” Fred is partially right here as far as the white bands are concerned. The white has retained its form less than in most beads in Kwan’s collection, but the difference may possibly be explained by varying soil conditions. Still, it’s definitely worth noting. This is the only one of Fred’s points that I would go along with wholeheartedly.

3. “Dots should be uniform and filling drilled holes.” In fact, this is quite incorrect. First of all the holes are not “drilled”; they are of course created by the drops of glass as they are applied to the core cylinder. And they are seldom uniform in size, presumably because of the difficulty in controlling exactly the quantity of glass. In Kwan’s book only 6 out of 21 beads with this kind of decoration have dots that could be described as being more or less uniform; all the others vary widely in size. I’ll attach a photo of a bead that has lost its dots (as most do) that is in the collection of the Royal Ontario Museum in Toronto. It’s a bead I’ve been able to examine closely; it was added to the collection in the early twentieth century. As you can see there’s no uniformity in these holes, andthey certainly weren’t drilled.

4. “Patina lacking in recessed areas.” This is a subjective judgement. To my eye, these areas where the glass decoration has worn away look exactly as they should. I have several of the pottery-cored glass eye beads and the areas of wear look exactly like this.

5. “These (central) lines should be perfectly centred.” No, they shouldn’t, and they’re not in most (70%) of the beads that have these central bands in Kwan’s book. These beads are very carefully made, but their geometry is not perfect - nor need it be.

6 “Peculiar white, red and black combination (of colours).” Here again, Fred may be partially right. This actual combination of colours is unusual, but each does occur frequently in Warring States beads. However, I haven’t yet come across an example of these tubular beads that has the small dot decoration in this reddish brown colour; they are generally white on the glass beads, though the dots of the eyes on the pottery-cored beads are various colours - blue, brown or yellow. How to weight this in the overall picture is a matter of personal judgement. For some it may be decisive; for me, because I think the bead is authentic, it can easily be explained by beadmakers playing with the available resources and trying out new arrangements of the patterns - which obviously happened constantly in this period of intense experimentation.

Incidentally, I ought to point out that it’s quite difficult to know what the original colours of these Warring States beads sometimes were. I think the core tube was almost certainly a strong blue, but the red dots might have actually been a shade of purple that was common in monochrome glass at the time. I’ll attach an ear ornament of mine (slightly later, Han dynasty) that was accidentally broken; the dull weathered surface opened up to reveal a beautiful bright purple.

So there we have it, more kindling for the disagreement. Whatever the conclusion, it’s great to have a chance to talk about these wonderful beads. 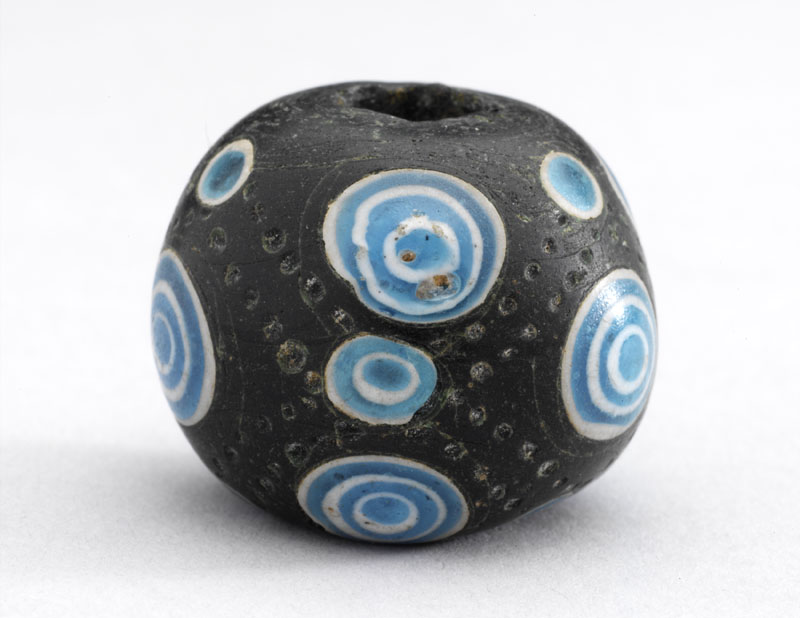 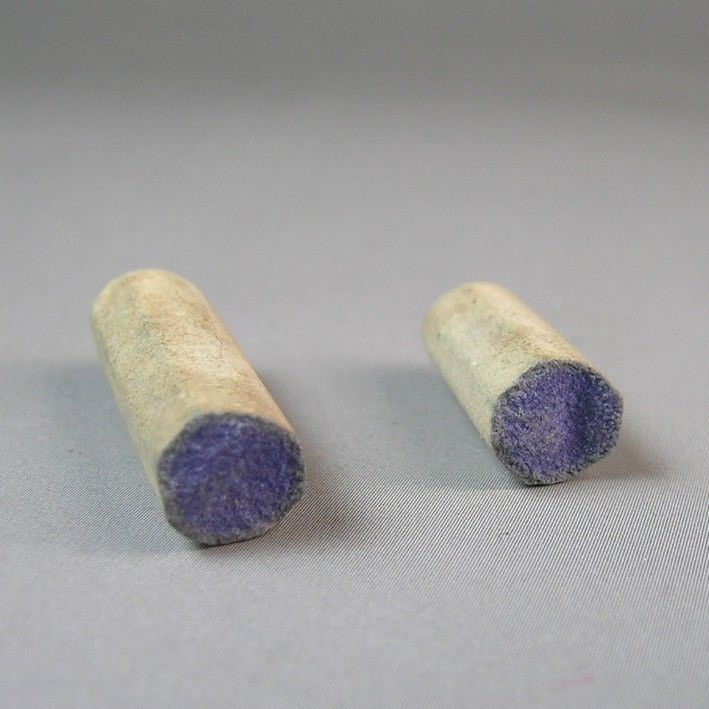