Post Reply
05/20/2020, 21:38:54
In viewing your photos I am impressed (!) that the decorations appear to have been sticks of glass that were blunted on the ends, and applied. In other words, they were simple preformed parts, and not derived from trailing (semi-molten glass)—as would be typical of Venice and other industries.

I have documented a number of beads that have this sort of application. One group was intended to simulate Tibetan zi beads. (These are have what appear to be very simple rudimentary cane elements, to create the eyes.) I've seen these beads a few times, and I own a set of them—and showed them in my 2002 article "Tibetan Zi Beads," for Arts of Asia, in Plate VI. I attach it here. The beads I refer to are in the lower middle area, but not the lowest beads. Two beads are fusiform (elongate), and three below them are oblate. I have no practical idea where these were made. But I have to assume the makers were not proficient at trailing. So, India, China, and even Japan come to mind.

The other beads I've seen are old African-made powderglass beads—as are discussed in Wild Beads of Africa. It is very apparent that West Africans were not adept at making trailed decorations (directly onto beads)—though they made impressive versions of preformed elements, that were used to simulate other beads that interested them.

So, whomever made your bead, it is from an industry that did not indulge in routine conventional trailing. My best guess would be India. But I am not confident this is the answer. 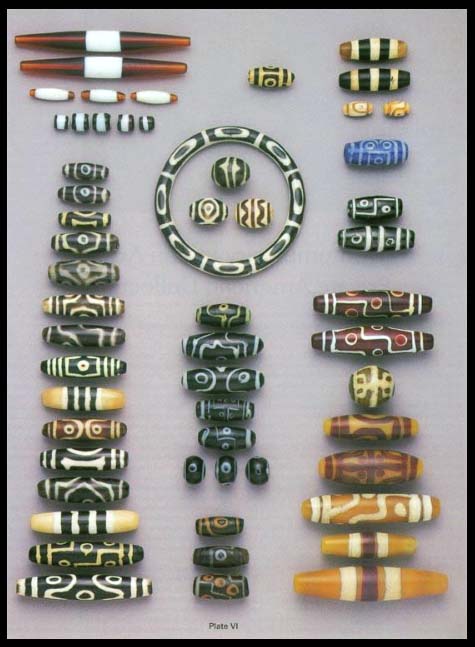