Some years ago I composed an article on kakuten beads for The Bead Museum Quarterly, based on my research—since I am familiar with the issues and history.

Let's remember that, with unknown materials, ideas change over time. Eventually, science will step in and determine what is what.

In the instance of kakuten, the prevailing story was that this material derived from the Japanese crested crane. And there seems to have been some mistaken idea that a crested crane was like or similar to the hornbill bird, and therefore "hornbill ivory" (the keratinaceous material exploited by the Chinese—and occasioanly seen as a Japanese bead or ojime). But the crest on a crane is a tuff of feathers. There is no crane growth that would provide the material of kakuten. So the Japanese tradition and name is based on a mistaken idea.

In the 1980s, a materials "expert" at UCLA determined that kakuten was "diseased (cancerous) whale tooth." I suppose he looked at a bead, and made a comparison to a tooth that was in their collections that seemed similar. However, I rejected this idea out-of-hand for a very simple and straightforward reason. In examining multiples of kakuten beads, I noticed that they had a repeating predictable structure. And this countered any idea that the conformations of kakuten resulted from a cancerous growth—which would be different in each instance.

I determined that kakuten was derived from a mammal—and obviously a large mammal, and most-likely a quadruped. I considered they might be elephant teeth. More about this shortly.

In about 2000 I went to the Smithsonian in Washington, DC, and had a consultation with their top avian specialist. I showed him the bead I had, explained the "crested crane" idea and the "cancerous whale tooth" idea—and he confirmed for me that there was NO crane in Japan with a ivory-like or keratinaceous growth. (Which I knew.) And he seemed to think the whale idea was silly. (Which it was.) He then told me we should confer with his colleagues—who were meeting in another room, watching a presentation on a new dinosaur species. So we went there.

When the presentation (that was interesting) was over, he gathered these men into a group, explained who I was and what the issue was—and we passed-around the kakuten bead. The prevailing opinion, when expressed, was that this was the tooth of a large mammal. I affirmed that this was my idea too.

I considered elephant teeth because elephants are exploited for their tusks, that are ivory—and kakuten appears to be ivory (dental material). As it happens—I know from studying ivory and elephants—different species of elephants have very different and distinct dentitions. In fact, since teeth persist from great antiquity, some species of elephanrs are only classified by their teeth, that still remain in the geological record. But I conceded that kakuten could be from any number of large mammals.

In recent years a DNA analysis has revealed the animal that provided kakuten is the horse. Horses can be considered a renewable resource—and their teeth exist to be exploited for ivory beadmaking. None of this surprises me. I predicted it—the horse being "a large quadruped mammal."

So the above is how all the issues around kakuten transpired, and have been resolved. Let's not judge Robert Liu harshly. He was certainly correct that kakuten is not "crested crane." And he merely reported what the UCLA "expert" said as that man's opinion, at the time Collectible Beads was published. (1995.)

By the way, a few months ago I purchased a quantity of new kakuten beads—all dyed red, very spherical, and with small perforations compared to old beads. These were represented as being "old" and as being "Japanese." However, I am more inclined to think that these and all kakuten beads probably come from China—even though they are often associated with Japan. (I would like to see this disproven if that were possible.) See the photo attached here. These beads are also dyed green, yellow, and purple. I agree that in a few instances kakuten beads have served as ojime. But I have seen very few occurrences. And we have to respect the idea that sometimes a missing ojime can be replaced by another bead. And, think about it this way: If kakuten beads had been made in Japan, there would be no need to speculate on the origin of the material. The Japanese would know the origin. This implies a possible or probable foreign origin (that was not disclosed). 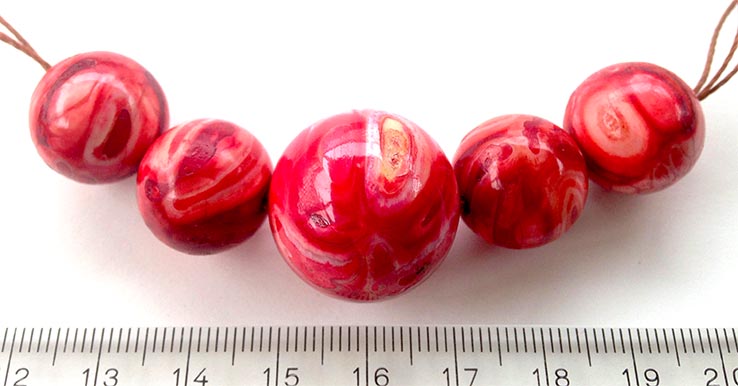