Post Reply
05/11/2021, 04:12:26
It occurs to me to make the following remarks regarding what have been popularly called "Russian trade beads," and how this name has morphed over time (in terms of its use).

Originally, "Russian trade beads" was a regional designation that spanned the Pacific NW from Alaska to Northern California (where I live; notwithstanding that I was born neat Seattle, WA). For four decades it has been understood that "Russian trade beads" were actually made in Bohemia, and that their appearance as trade goods within the historical Fur Trade Era occurred rather late—since these are early-to-mid-19th C. beads. (The American Fur Trade Era ended in ca. 1850.)

It has been suggested that these Bohemian beads were received by Russian fur traders, via a Chinese connection. I'm not certain what those details may have been—since we are talking about a long time ago in modern bead history, witnessed and studied by me. And my memory re. this is vague, and I don't recall where I first heard the idea.

The beads in question are drawn geometrical (longitudinally faceted) beads, most-often cobalt blue (but actually quite a variety of colors) of a rather dark tone. Some have thin more-pale inner layers that make the external colors more visibly blue. The beads are somewhat unrefined, as though "made in a hurry," and were additionally faceted by having their corners or edges ground-off. They range in size from ca. 5 to 6 mm in length, up to ca. 15 to nearly 20 mm.

That these beads were traded by Russians to indigenous Native Americans is not challenged. They are commonplace enough within the region that many people are familiar with them. What has been challenged is any supposition that the beads were made by Russians—this being a simplistic and naive idea. (Consequently, I always place the name in quotations, to indicate it is not intrinsically accurate.)

In 1985, bead researcher Elizabeth Harris composed a booklet, "The Russian Bead," for the series "Northwest Bead Chart No. 3"—published by Gerald Fenstermaker. Elizabeth included a single long faceted blue bead in her color Plate I on p. 5, as figure 10. Thus, the definition or inclusion of a different bead began.

In 1987, in The History of Beads, author Lois Dubin repeats the Europe-to-China-to-Russia story (without including a citation, p. 274), but does not describe the beads. However, four color photos, Plates 93 to 96 on pp. 108-109, are presented as sample cards from the Levin Company in England. Plate 96 consists of 22 beads or groups, of which two appear to be "Russian" beads, along with 17 or 18 specimens that are faceted beads, and are probably Bohemian. The Levin Collection is believed to date from ca. 1850 (which is close to the time that commercial sample cards began to be manufactured and distributed as selling features. It is not surprising that few sample cards show "Russian" beads. In The Bead Chart (the timeline of bead history), three conventional blue "Russian" beads are shown at 112a b & c. (It is speculated that they may be Venetian. These are specimens 132a b & c in the 2009 edition of THoB.) It is not really clear whether anyone would recognize these beads as "Russian," apart from viewing the associated text. However, it's possible that some association might be made between these and other faceted Bohemian beads of that period.

Two years later, in 1989, the Picards produced their fifth publication, "Russian Blues, Faceted and Fancy Beads From the West African Trade. The booklet presents 1472 bead designs (individual beads and strands), plus those seen on the four pages making the outside and inside front and back covers. It is an astounding array. Guest author, Elizabeth Harris, provided a very good review of faceted beadmaking—covering drawn and molded varieties. Although I suppose it was not the intent of the Picards to expand on the definition of "Russian trade bead," to include other faceted beads, I think this was a predictable outcome.

Getting back to the necklace in question, The small long faceted blue glass beads that make up most of the glass beads present, are not "Russian" beads—though they are similarly-made Bohemian (or Central European) beads. I first encountered these beads (not surprisingly) from the inventories of West African bead merchants. And, frankly, I would not be surprised at all if this was the source of the beads used in the necklace we are discussing.

All of this is to say, I opt for a tighter definition of what is included as a "Russian" bead. And, actually, in my opinion, these ought to be beads that were actually traded and collected in the Pacific NW. That is certainly what is expected, by astute collectors who are interested in historical situations.

The photo shown here is a necklace from Alaska, that is composed from blue "Russian" beads, other historical trade beads, and locally-made shell beads. It is a top specimen from a private collection. 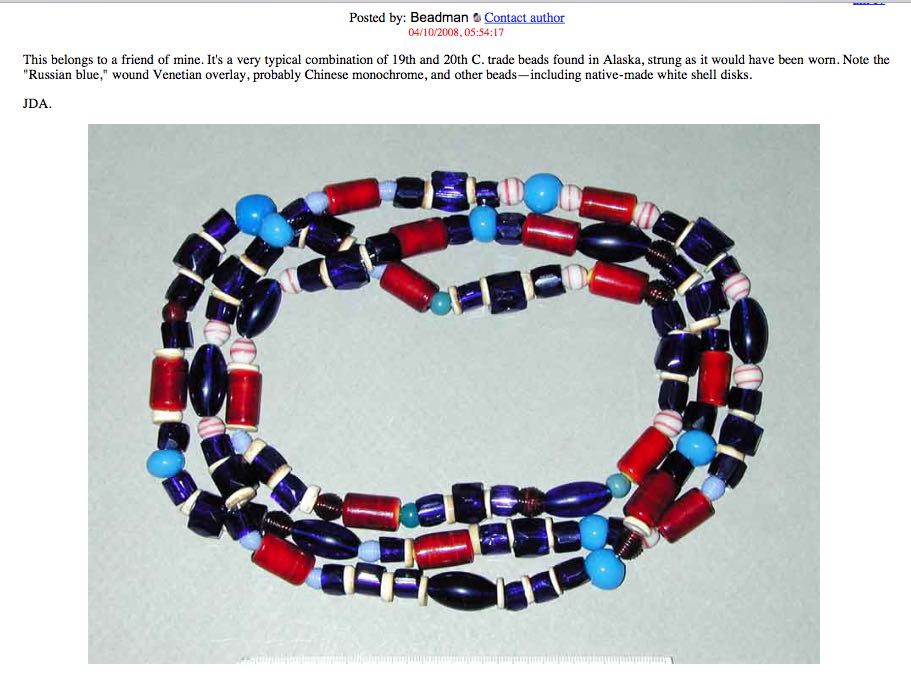