The wood used in Mauritania & Mali for wood beads, both plain and inlaid as shown in the above pictures, is from the tree Dalbergia melanoxylon, otherwise referred to as African Blackwood. It is a wood used for fine instruments like clarinets. The trees grow slowly and there are efforts underway to grow the trees in nurseries to make the harvests more sustainable. Otherwise the conservation status is considered "near threatened", which is one rung above "least concern". So if you are buying or selling beads made from African Blackwood you can be mostly free of worry that you are involved in any species destruction.

This wood is technically no longer considered "ebony" - a name reserved for a different genus of trees, Diospyros, whose wood is very dense and harder to machine than Blackwood. Most of the true ebony wood trees are very threatened due to over-harvesting and are protected in some of the countries where they are found, mostly Indonesia, Sri Lanka, and south India. Ebony trees in West Africa are reported to be virtually wiped out by illegal harvesting. I don't know if any true ebony beads exist, but I expect they do. Not sure how they would be distinguished from African Blackwood. Some pix I've seen of ebony wood shows a lot more variation in the brown coloring than the Blackwood beads I have. Other pix appear to be a very uniform black.

As far as density - my Blackwood beads sink in water and ebony is also dense enough to sink, so that test can't be used to distinguish the two woods.

Black coral does indeed resemble African Blackwood. I've taken a picture of the two materials to show how the grain differs. The photo has been adjusted quite a bit to show the grain - both sets of beads are extremely dark, bordering on black, when in natural light. These black coral beads are some of the largest I've ever seen for sale. If you find much larger beads such as the oblates in the picture, I'm sure that they are wood rather than coral. Also, a lot of Blackwood beads still have light tan areas of sapwood, which is a feature not seen in black coral.

Lots more info can be found on the web under African Blackwood and ebony. 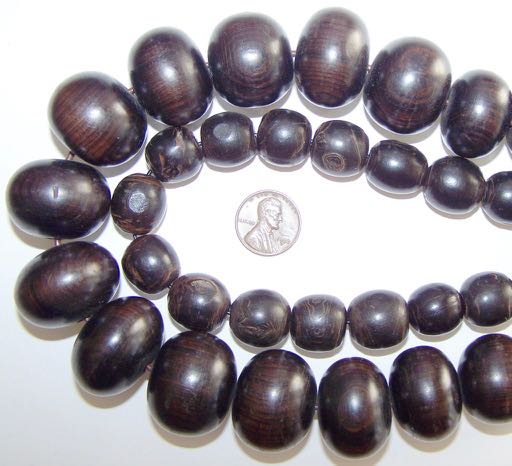