Post Reply
12/24/2021, 12:03:37
Correspondence with the seller of this necklace revealed that it was her mother's, purchased during a tourist trip to China in 1979. She found her mother's diaries of the trip, with an exact itinerary.

These beads display some uncommon aspects not seen in the usual white cloisonne necklaces on offer at eBay and other auctions.

Design - evidently made by one of the older craftsmen skilled in fine wirework. A rare concept of two reversed branches of plum blossom, one on each side in opposition to each other. One side of each bead thus always looks "right side up" no matter what direction they're strung. The blossom branches are worked in an old-fashioned style, using 13 little pieces of wire each.

The tiny background clouds mirror the placement of the branches - the group on one side is usually upside down from the group on the other. Each of these beads took a lot of work.

Morning glory clasp - the fact that these were acquired in a trip in the late 1970s is a sort of early marker for this style of clasp, which is unique to Chinese cloisonne necklaces, and which disappeared by the time the 1990s rolled around, apparently consistently replaced with cheap filigree clasps. 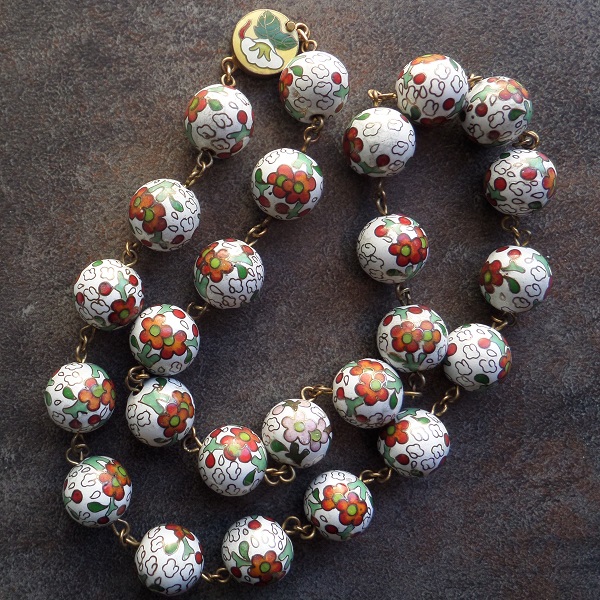