Post Reply
03/07/2020, 19:59:55
The primary interesting thing about making drawn canes is that they can be reduced in the elongation process to the smallest diameter, and still retain their original characteristics. We can see this with drawn seedbeads, as well as complex canes for millefiori work.

A popular drawn seedbead is the Venetian cornaline d'Aleppo, that has translucent red-over-white glasses. They are among the largest and smallest mass-produced hot-tumbled beads made. Here's a photo that demonstrates typical size ranges. But I have sandbeads (very small seedbeads) that are so small they are difficult to photograph. These happen to be brown-over-white.

I would have to guess that your small bugle beads are probably modern—because of the translucent red glass.

Nevertheless, there are some mysterious red overlay beads, that I have only seen among African trade beads. These are red-over-clear glasses. I have suggested that these might be early European beads. Possibly even made in Flanders (based on an historical reference I have—that would place them squarely in the 17th C.—and apparently colored with gold.) This is an idea I have pursued since the early 1980s, when I was reading glass literature, and had come across a single bead that seemed to fit in with what I read about the author, Antonio Neri, who wrote an important book about making glass. Neri also discussed the manufacture of canes for beadmaking. In the mid-90s I managed to acquire a string of trade beads that included a number of these beads—allowing me to examine a variety of specimens. I have photos in my Archive—but not easily at hand.

In any event, your beads are different, in that they appear to be only translucent red glass, and the beads seem to be small well-made bugle beads. Whereas, the overlay beads are somewhat larger, and crude—as though they were made by someone (or some industry) that was new to drawn beadmaking.

(By the way, your photo has been hijacked and posted at FaceBook, in conjunction with suggestions of great age—that I suppose is highly unlikely. And perhaps posted for the purpose of indulging in an argument about origins. I will not participate there, nor here, with someone who is trolling for a fight. I have expressed what I think here.) 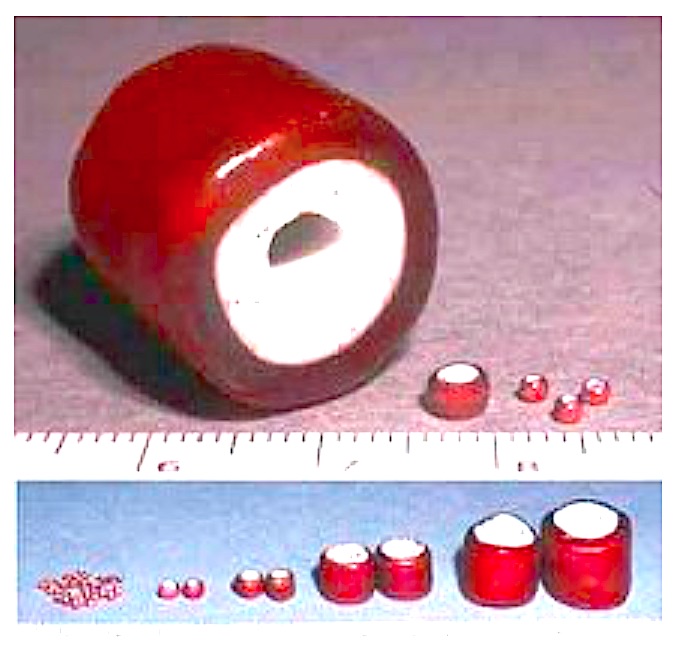