Post Reply
03/07/2020, 02:03:28
Back in the 1980s I worked for my friends Kate Fitz Gibbon and Andrew Hale, who operated Anahita Gallery—specializing in artifacts and textiles from Central Asia. Mainly Afghanistan. I made necklaces, repaired things, and sometimes worked for them at The Gift Show in Los Angles.

One day Kate approached me and said they had acquired a group of micro-beads from Afghanistan, that were remarkable for their sizes and materials—they being carnelian, agate, turquoise, and lapis. Although they were very tiny, they paid $1.00 for each bead.

Kate asked me if I would make something for them from those beads. Something to have in their personal collections. It would not be intended to be a "finished piece"—because there were not enough beads to make anything wearable. They wanted something that resembled a fragment of an ancient construction. Kate included some small ancient fused gold beads, to be worked in, that would facilitate making multiple strands held together.

I made the piece seen here. You can see that the smallest beads, at the lower end, are less than one millimeter in diameter. They are quite amazing.

Flash forward to 2012. My best client and good friend Naomi Lindstrom has passed away, and I was helping her family settle her estate—particularly in catalouging her bead collections. One day we came across the piece I had made for Anahita—much to my surprise. A few years previously, Kate and Andy were moving to Santa Fe, and building a house. To that end, they were selling items from their personal collections—and I suppose that is when and how Naomi acquired the fragment.

I told Naomi's relatives the story. I photographed it, placed it in the provisional catalogue, and priced it. Sometime later, I suppose thinking that it would be difficult to sell, they gave it to me as a gift. So now it belongs to me—and I am delighted to have made it, have it appreciated, admired by Naomi, and finally presented to me. 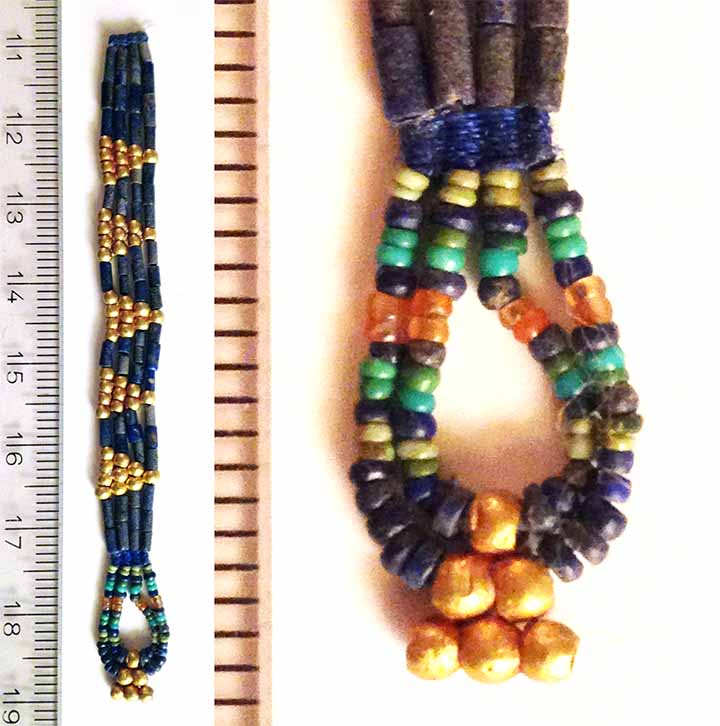