Post Reply
12/07/2019, 20:04:45
IMHO the buttons that resemble horn are probably casein buttons (see center part of top button, but not the greatest example) since casein was deliberately colored and blended to be a horn substitute. I tend to doubt that a powder suspended in any kind of matrix, would look like real horn. Did you hot pin one of them?

I haven't spent a huge amount of time on casein beads & buttons but yes they often smell strongly like musty milk. Sometime I have to heat the item very hot in hot water, or use a hot point, to be sure. Some items have very little odor by comparison, so they may not be pure casein formaldehyde but CF blended with something else. As usual, impossible to know for sure without a lab test.

After I learned about composition buttons, I realized that there were synthetic or semi-synthetic concoctions also used for beads that will likely be impossible to identify. When I went to the CA button show recently, I was able to pick up a button considered to be "composition". Hot needling it produces a noxious odor. When I say it is indescribable, I mean that to me, it's apparent that it's a conglomeration of industrial plastics & resins but nothing identifiable. The ID could only be done by analytical instruments. But definitely not rubber, casein, phenolic, or any of the newer thermoplastics that I've tested multiple times.

FYI - getting a fishy odor from a bead - which may be the reason someone thought a bead was made of fish bones, is the tell-tale odor of urea formaldehyde (UF). It was also a thermoset and commercialized in 1929 as a replacement for Bakelite. UF takes colors better than Bakelite so it's found in a very wide range of colors. The trade name in the UK was "Beetle" and it was used for buttons for certain. I don't have any beads that I know or suspect are made from UF but they are probably out there. Another related material with a fishy odor is melamine formaldehyde, also used for buttons from the 1940s. No idea at present if it was ever made into beads. Note that buttons were made from the early plastics by press-molding to a net shape. Beads made from thermoset plastics had to be machined, then polished. It's possible some plastics didn't machine well or didn't polish up into something that was attractive enough for jewelry. Interesting topic though. 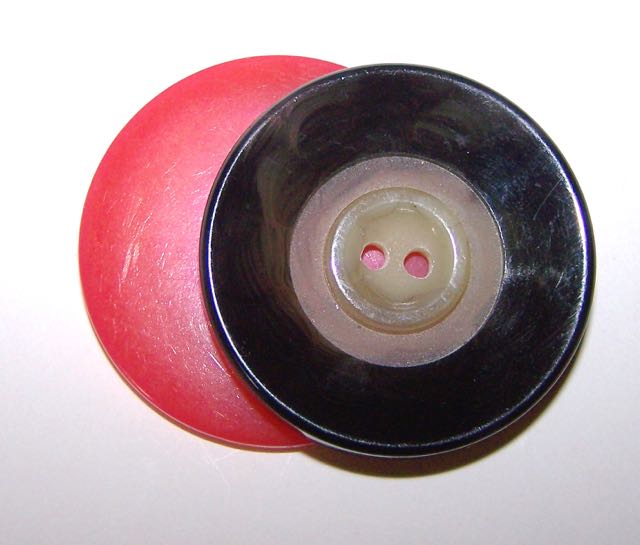