The material is semi-synthetic. It's composed of the milk protein casein, cross-linked with formaldehyde. Galalith (milk-stone) was the main trade name in France. In England one trade name was Erinoid; however the shortened form of the industrial name "casein formaldehyde" was usually used. One of the first large uses of casein was to make imitation horn buttons and casein was also often referred to simply as "imitation horn".

Casein takes dyes well so a large variety of colors of casein beads were made. It carves easily so a lot of beads with this type of geometric design were made. I think they are kind of mechanical-looking. The other type of casein bead you'll see quite often is two-tone, made by dyeing the outer layer and carving deep into the ivory white (natural color of casein) interior.

Casein beads are very often listed for sale as Bakelite. Interestingly, dyed tagua nut is also sometimes advertised as old Bakelite. I know because I have bought some and had to return them. 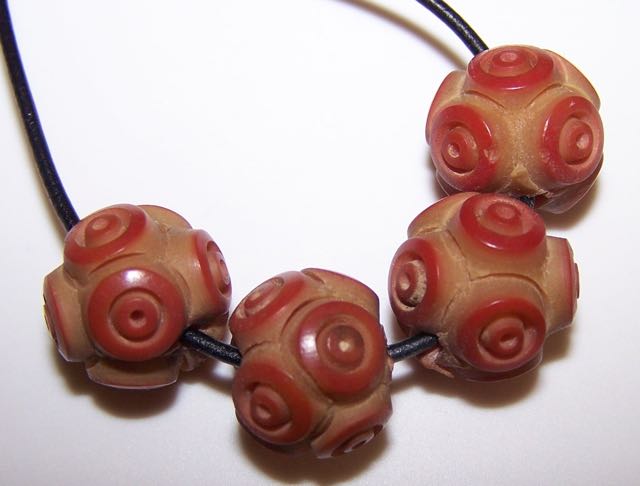