Post Reply
08/02/2019, 19:38:54
My Geiger counter (GC) has a built-in check so I know it is functioning normally, although it has not been officially calibrated. The GC detects beta and gamma rays. I haven;t said anything about gamma rays but I determined that the beads did not emit any, which is in accordance with the fact that uranium nor any of the daughter elements emit gamma rays.

I received the 5 beads from Audrey that are shown in the picture. The top 3 are more blue-green and the bottom are more yellow-green. The beads had slightly different weights so I "normalized" the readings for each bead to 2.5g. As you can see, the green beads had somewhat higher readings than the blue beads, so they likely had more of the uranium salt that produces the green-yellow color.

I could not get the beads to physically touch the detector tube, which is guarded by a protective film and a metal grate. The beads were about 0.10" from the detector tube. So the readings right at your skin surface would be a bit higher.

For reference, during the time I was doing these tests, the background readings were around 0.01 mrem/hr. This value was subtracted from the readings to give just the amount due to the beads. 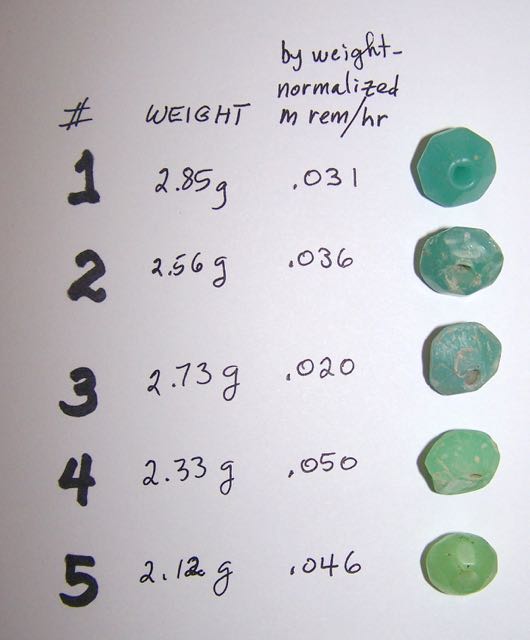