Thanks, everyone for this interesting thread. Sorry to be so late getting into it.

Brigitte, as you say, your bead appears to be “core-formed” - which means the glass has been trailed, shaped and marvered around a clay core. That certainly seems to be true from what one can see of the perforation. But that technique, which was used for the making of Hellenistic alabastrons in the first millennium BCE, was never, as far as I know, used for making any beads that resembled yours. Beads such as the beautiful one on Fred’s necklace are, as I understand them, wound, trailed, combed and pinched (is that the right word for the vertical indentations?), and they almost always have applied glass rings around the perforations (usually yellow, sometimes green). So like many reproductions, your bead seems to imitate the appearance but not the technique of an ancient bead.

I don’t think your bead resembles any of the reproductions of west Asian beads that I’ve seen in recent years in East Java. Sometimes it seems as though we’re attributing all the fakes that appear to Java (which I guess testifies to the adaptability of the beadmakers there), but, like Joyce and Hans, I think this bead is much more likely to be from Syria or Lebanon. It looks very similar to me to the fake alabastrons that are produced for the antiqities market. I’ll attach a photo of one that I bought there about fifteen years ago. I got it in a glass factory in Beirut for $10 or so, and later the same day I saw an almost identical one (no more convincingly aged) selling for $1300 - which would have been cheap if it had been authentic. You’ll notice how similar the cracks are to the ones in your bead, with the same residue of what I imagine is a mix of limepaste and adhesive.

As Fred says, the size of your bead ought to be one of the suspicious elements with your bead. I certainly haven’t seen an authentic one that was anything like as large. But I don’t have a problem with the yellow. Though most ancient yellow glass is a more mustardy colour, there are many lemon shades in ancient canes too.

As to the bead that you asked for opinions on, Fred, like you I have my doubts. I’ve bought authentic items from this seller in the past (not beads), and that’s always a positive factor for me. But ithe bead itself is quite puzzling. The design seems more Phoenician than Islamic in its strictness, but the glass, especially the yellow, doesn’t resemble the Phoenician glass that I know at all. (It doesn’t look like the modern Chinese copies either.) But it’s very pretty and very well done. Fred, can I ask what your own suspicions are based on?

And finally, Fred, could we please have some close-ups of that beautiful necklace? 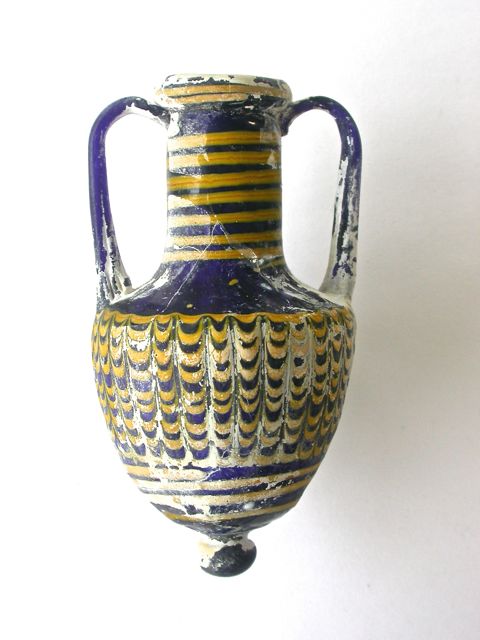